The new Metro railway network in Hanoi is the focus of both Vietnamese people and property foreign investors in 2018 & 2019. For the Vietnamese, they hope the new elevated Metro railway network will solve the horrible traffic congestion in Hanoi. Hanoi citizen have to wait a long time for the Line 1: Cat Linh – Ha Dong (it takes nearly 10 years). However, the construction contractor from South Korea has brought positive signs when the Line 2 has been being built 5 times faster than the first line. As for foreign investors, they believe that the new Metro network helps them coin money.

Generally, The Metro Network System makes contribution to the economic development of the region and improvement of urban environment thanks to reductions of traffic congestion and pollution. The first two railway lines built were Line 2A: Cat Linh – Ha Dong, and Line 3:  Nhon-Hanoi Station. As of September 2019, Line 2A after 8 adjustments and the project schedule breaks, they have not yet determined the time of commercial operation. Meanwhile, Line 3 section Nhon – Hanoi Station is expected to commercially operate the whole route by the end of 2022.

In the field of real estate, the new Metro Network System will be a big push for the market. The first projects benift from the railway is new ones on Nguyen Trai street & Cau Giay street. These are considered the backbone of the entire metro line that Hanoi people have been waiting for so long.

According to the experience of the world real estate market, for example in China, Thailand, the Philippines … each new metro line will lead to the rising of a series of “satellite” utilities. This will improve the quality of life and convenience in transportation. of the whole region.

Demand for property in the area surrounding metro lines also increased by about 25% compared to the time before they were operated. This definitely pushes up real estate prices in these areas, bringing great profits to property investors.

There is a fact that metro is still a strange concept to Vietnamese people. Therefore, domestic investors have been relatively cautious when choosing real estate projects located near Cat Linh – Ha Dong & Cau Giay elevated railway. Meanwhile, foreign customers, coming from countries that are familiar with metro such as Japan, Korea … are the main customers of these project. 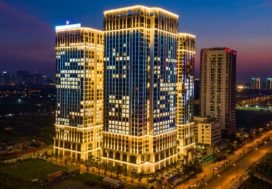 Why is Sunshine Riverside the most potential project for investment?